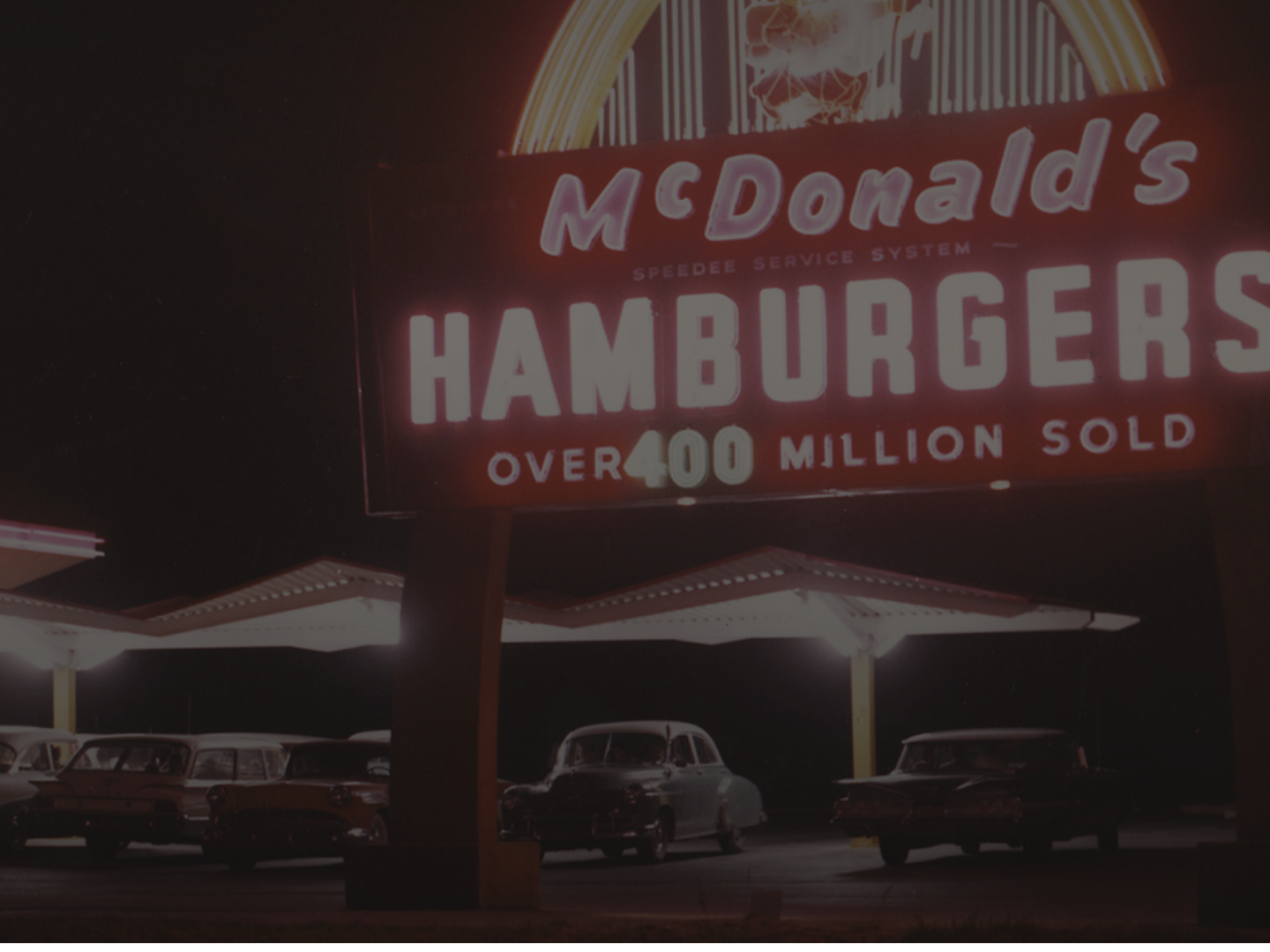 In 1917, 15-year-old Ray Kroc lied about his age to join the Red Cross as an ambulance driver, but the war ended before his training finished. He then worked as a piano player, a paper cup salesman and a multi-mixer salesman. In 1954 he was surprised by a huge order for 8 multi-mixers from a restaurant in San Bernardino, California. There he found a small but successful restaurant run by brothers Dick and Mac McDonald, and was stunned by the effectiveness of their operation. They produced a limited menu, concentrating on just a few items - burgers, fries and beverages - which allowed them to focus on quality at every step.

Kroc pitched his vision of creating McDonald's restaurants all over the U.S. to the brothers. In 1955 he founded the McDonald's Corporation, and 5 years later bought the exclusive rights to the McDonald's name. By 1958, McDonald's had sold its 100 millionth hamburger.

""If I had a brick for every time I've repeated the phrase Quality, Service, Cleanliness and Value, I think I'd probably be able to bridge the Atlantic Ocean with them." - Ray Kroc

Ray Kroc wanted to build a restaurant system that would be famous for food of consistently high quality and uniform methods of preparation. He wanted to serve burgers, buns, fries and beverages that tasted just the same in Alaska as they did in Alabama.

To achieve this, he chose a unique path: persuading both franchisees and suppliers to buy into his vision, working not for McDonald's, but for themselves, together with McDonalds. He promoted the slogan,"In business for yourself, but not by yourself." His philosophy was based on the simple principle of a 3-legged stool: one leg was McDonald's, the second, the franchisees, and the third, McDonald's suppliers. The stool was only as strong as the 3 legs.

Ray Kroc believed in the entrepreneurial spirit, and rewarded his franchisees for individual creativity. Many of McDonal's most famous menu items - like the Big Mac, Filet-O-Fish and the Egg McMuffin - were created by franchisees. At the same time, the McDonald's operating system insisted franchisees follow the core McDonald's principles of quality, service, cleanliness and value.

The Roots of
Quality

McDonald's passion for quality meant that every single ingredient was tested, tasted and perfected to fit the operating system. As restaurants boomed, the massive volume of orders caught the attention of suppliers, who began taking McDonald's standards as seriously as McDonald's did. As other quick service restaurants began to follow, McDonald's high standards rippled through the meat, produce and dairy industries.
Again, Ray Kroc was looking for a partnership - this time with McDonald's suppliers - and he managed to create the most integrated, efficient and innovative supply system in the food service industry. These supplier relationships have flourished over the decades: in fact, many McDonald's suppliers operating today first started business with a handshake from Ray Kroc.

In 1961, Ray launched a training program, later called Hamburger University, at a new restaurant in Elk Grove Village, Illinois. There, franchisees and operators were trained in the scientific methods of running a successful McDonald's. Hamburger U also had a research and development laboratory to develop new cooking, freezing, storing and serving methods. Today, more than 80,000 people have graduated from the program. 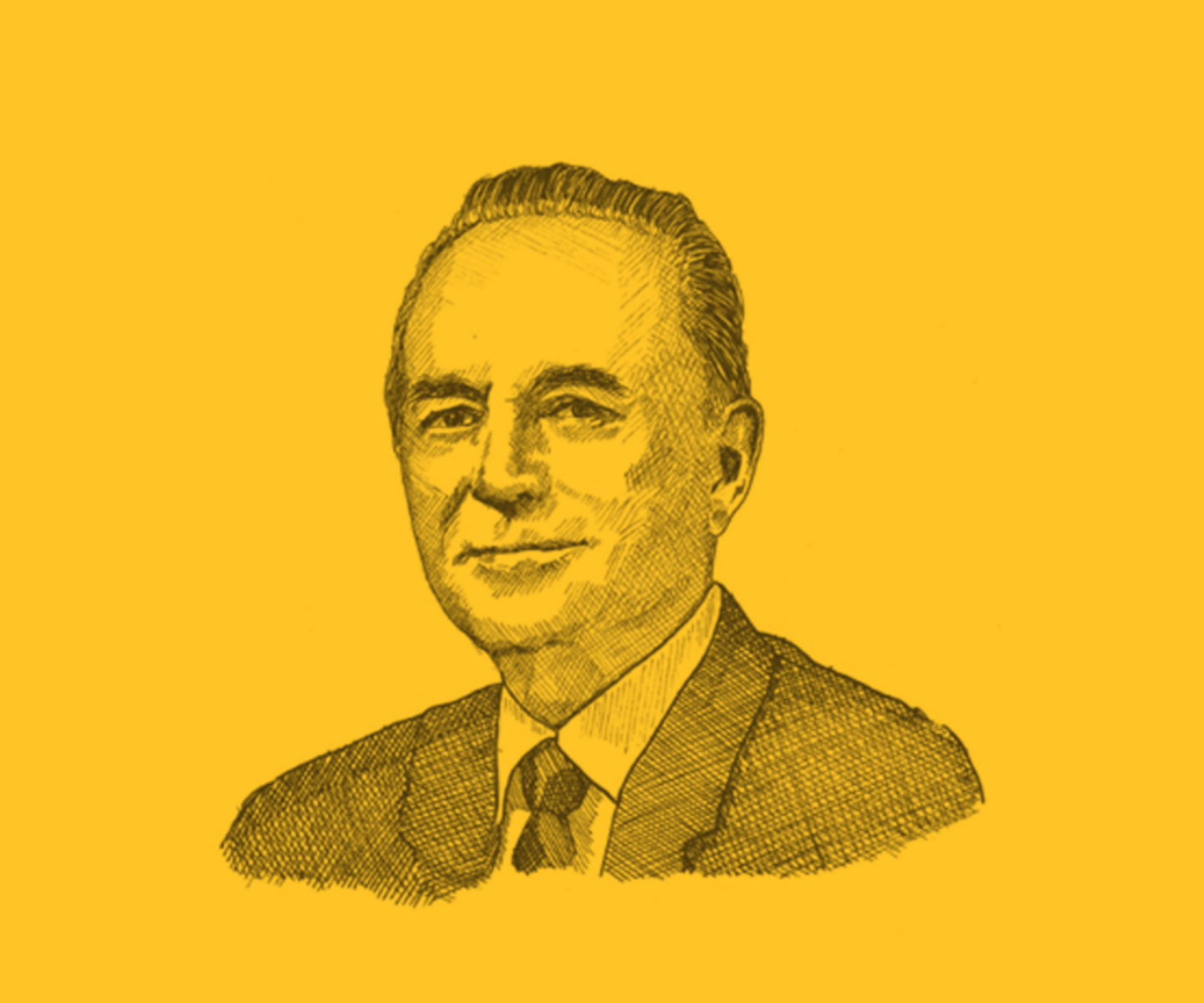 The End of a Legend

Right up until he died on January 14, 1984, Ray Kroc never stopped working for McDonald's. Even when he was confined to a wheelchair, he still went to work in the office in San Diego nearly every day. He would keep a hawk's eye over the McDonald's restaurant near his office, phoning the manager to remind him to pick up the trash, clean his lot, and turn on the lights at night.

From his passion for innovation and efficiency, to his relentless pursuit of quality, and his many charitable contributions, Ray Kroc's legacy continues to be an inspirational, integral part of McDonald's today.